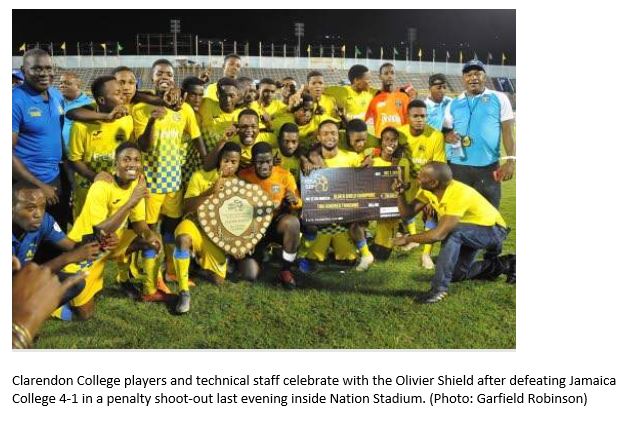 Clarendon College players and technical staff celebrate with the Olivier Shield after defeating Jamaica College 4-1 in a penalty shoot-out last evening inside Nation Stadium. (Photo: Garfield Robinson)
Clarendon College (CC) goalkeeper Prince-Daniel Smith was the hero scoring a stoppage-time equaliser that propelled his team to a dramatic 4-1 penalty shoot-out win over Jamaica College (JC) to lift the Olivier Shield at the National Stadium last night.
Substitute Oquassa Chong had given JC what seemed to be the winning goal in the 89th minute, slotting home past a bewildered Smith in goal.
But with basically the last kick of the game, the talismanic Smith went up for CC’s last attack in the 90th+5-minute and when his opposing number Daniel Russell spilled the corner, Smith was on hand to poke home a sensational equaliser that forced the game into penalty kicks, as the game ended 1-1 in normal time.
Richard King, Colin Fletcher, Earl Simpson, and Andre Nicholson were perfect from the spot for CC, who kicked first.
Both Tyrese Small and Richard Thompson missed for JC, blasting high over the bar while Oquassa Chong tucked away their second spot kick.
It was CC’s third outright win of the all-island Olivier Shield with victories in 1977, 2018 and 2019, and their fifth overall having shared the title in 1978 with Camperdown High, and 1998 with Dunoon Technical High.
Having lost the all-island Champions Cup to Kingston College, CC secured their second title of the season and continued their reign as the best schoolboy team in Jamaica.
Sponsored Links

It wasn’t the most exciting game as both teams failed to produce the kind of form befitting an all-island final for the supremacy of schoolboy football. But in the end, no one can take away the title from CC as they were the more adventurous team throughout, although JC came into their own late in the second half and should have won in normal time had they not missed a couple of chances.
In front of a relatively small crowd dominated by the visiting Clarendon supporters, JC emerged in white tops and blue shorts, while the defending champions were decked in yellow tops and bottoms with a sprinkling of blue on their chests.
It was the Chapelton-based CC who had the ascendancy in the early exchanges, though JC, courtesy of Omar Thompson, took the first shot at goal in minute 11.
There wasn’t much to write home about in the first half in a game that was interrupted for 46 minutes as technicians worked feverishly to get the stadium floodlights on.
In the 27th minute, JC’s goalkeeper Russell complained to referee Veralton Nembhard that he could not see the ball properly and the game, which started at 5:07 pm, was stopped at 5:33 pm.
It was announced that lights would be available within 15 minutes but that did not happen until 6:14 pm when the grandstand spectators erupted with loud applause when the floodlights flashed on.
Four minutes later, the game resumed and the teams played out the next 18 minutes as the dour first half ended 0-0.
Upon the resumption both teams fought for ascendancy with Clarendon College having more possession, while JC appeared comfortable sitting behind the ball.
With their substitutions, JC gradually got a foothold in midfield and started to look dangerous when substitute Isaac Scott got a glorious chance in the 83rd minute, but he kicked high with only the goalkeeper to beat.
Two minutes later Scott again saw his close-range shot blocked as the urban champions turned up the pressure and substitute Chong found the back of the net, slotting home from in the 89th minute for what seemed to be the winner.
But with time running out, goalkeeper Smith deserted his goal area and surged forward and from a corner kick, challenged his opposing number, who spilled the catch and the ball fell kindly into his path, and he made no mistake in the 90th+5 minute.
In the resulting spotkicks, King scored the first for Clarendon, then Small booted high, as Fletcher converted the second for Clarendon before Chong netted for JC. Simpson scored CC’s third before Thompson kicked high for JC, setting the stage for Nicholson to wrap things up for CC with their fourth kick, which led to wild celebration.