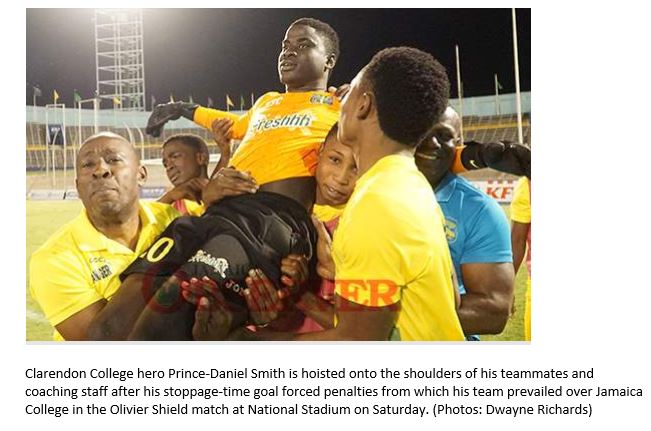 Belief made the difference for Clarendon College, says Coach Hyde

Clarendon College hero Prince-Daniel Smith is hoisted onto the shoulders of his teammates and coaching staff after his stoppage-time goal forced penalties from which his team prevailed over Jamaica College in the Olivier Shield match at National Stadium on Saturday. (Photos: Dwayne Richards)

Clarendon College hero Prince-Daniel Smith is hoisted onto the shoulders of his teammates and coaching staff after his stoppage-time goal forced penalties from which his team prevailed over Jamaica College in the Olivier Shield match at National Stadium on Saturday. (Photos: Dwayne Richards)
A 46-minute delay due to issues with the floodlights at National Stadium could do little to deter the focus or the determination of Clarendon College (CC) who defended the ISSA Olivier Shield title they won last year.
A dramatic ending to what was a largely forgettable game up to about minute 75 will live long in the memory of those who were inside the stadium to watch, and the thousands that watched on television as Jamaica College (JC) snatched defeat from the jaws of victory.
Except for the few minutes leading up to half-time break after the protracted delays due to bad light, Jamaica College, the Manning Cup champions, had pretty much played second fiddle to the daCosta Cup champions in the season finale.
Having soaked up a lot of pressure, the “True Blue” found a second wind late in the game and thought they had won it when substitute Oquassa Chong squeezed home a soft goal past Prince-Daniel Smith in the 89th minute.
But Smith would go from villain to hero when he took it upon himself to venture forward when his team won a corner kick deep into stoppage time. The Clarendon College custodian was closest to the ball when his opposite number Daniel Russell dropped what seemed to be a regulation catch and he calmly slotted home the equaliser to send the game into penalties.
Jamaica College, who had won the Manning Cup a week ago from the spot, were woeful on the night as they missed two of their kicks from 12 yards, while the Clarendon College kickers executed with precision and accuracy to win 4-1 and take the sparkling Olivier Shield back to Chapelton.
Winning Coach Lenworth Hyde hailed the bravery of his goalkeeper which led to the eventual win for his team.
Sponsored Links

“I am confident in the team, we worked pretty hard, but our goalkeeper, I didn’t tell him to do what he did, he just did that on his own. You see belief, it’s a hell of a thing.
“He believed in himself and he works hard every time. We got him from Camperdown, he came here for a reason and this is what you see tonight,” said an overwhelmed Hyde.
Hyde admitted that his team had been thrown off by the long delay due to bad light, but was pleased with the second-half response.
“When we came back out we were flat and JC took over the game but there were moments for JC for CC [in the game]. We took over back the game in the second half in some part and up to the final part JC was on the attack, so it was a very exciting game. I enjoyed the game,” he said.
The CC legend was delighted to have repeated as Olivier Shield champions for the first time in the school’s history.
“It means a lot, it’s just hard work and sacrifice. I lift my hat to the players, they are the ones that did it. The discipline that we instill in these players…I think that is why we won,” said Hyde.
Just as they did last year, Clarendon College are the only team to win two titles at the Under-19 level this season.
Jamaica College Head Coach Davion Ferguson credited his opponents for their mental strength.
“Both teams had the same interruption, both teams managed it well. They [Clarednon College] are strong mentally and never gave up. We gave up a foul, a tired challenge from Shaniel Thomas and that really gave them life and impetus.
“When you give a team like Clarendon College a glimmer of hope, they snatch it,” he bemoaned.